A Slew Of Solar Victories In Sacramento Victory For Rooftop Solar

In July of this year, a massive solar flare narrowly missed the Earth, and thus, we dodged the resulting electromagnetic pulse (EMP) that could have caused worldwide power outages. In the words of one nuclear weapons expert, the world escaped an EMP catastrophe.

Severe solar storms may result in terrestrial geomagnetic storms that could cause power loss on a global basis for an extended period due to DC-like currents in unprotected large, AC high-voltage transformers. Basic solar panel installations are resistant to the severe solar storm threat because an EMP is only a threat to equipment such as the large transformers at central generating stations and substations.

Distributed power systems, such as grid-interconnected solar, could keep the local power grid partially operational during a severe solar storm as long as sufficient solar power is available to the grid. Solar storms would not harm the actual power lines, and it is very unlikely that distribution transformers – such as those on power poles – would be affected. 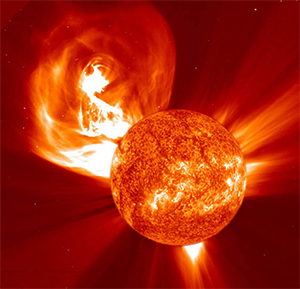 It may be cost-effective for some building owners contemplating a solar rooftop installation to pay a relatively small extra expense as insurance to prepare the solar roof for a subsequent EMP protection update. This can be done on an average sized home by first placing 1/64-inch-thick bonded aluminum sheets for roughly $2,000. This can later become a critical part of a shielded building and mounted solar panels.

The above procedure will be changed in a few years as solar manufacturers build the wire mesh shield internally within the panels.

It makes a significant difference in price if the EMP protection is to be added to a new building rather than an existing building. For a new building, the shielded installation may cost 30-50% less.

Much of the problem with retrofitting an electromagnetic shield is completely covering the building with a shield that not only covers the top and sides but tries to cover the foundation footprint of the internal room walls. This is easily done in a new building, where sheet metal can cover the entire foundation before walls are erected. The foundation sheet metal is then readily bonded to the shielded facade external walls.

The windows are covered with a shielded wire mesh grid similar to the top of the shielded solar panels. The outside doors have a bonding finger stock around the entire periphery to ensure there is no electromagnetic shield leakage.

Open-air EMP test certification for a standard solar panel system cannot be done using the industry-standard 50,000 V-per-meter pulse, as everything in the area would be burned out by the high level pulse. Instead, take advantage of the fact that any pulse can be broken into a range of frequencies. Seven discrete frequencies are chosen to test for a required 74 dB shielding effectiveness using readily available test instruments from the electromagnetic compatibility test community.

The test transmitter is a radio frequency (RF) sweeper or oscillator driving an RF amplifier, which then drives transmitting antennas, which will fit in the bed of a pickup truck. The building receiver site has a receiving antenna driving a tracking receiver located next to the building being tested.

EMP protection can be carried out using widely known methods to ensure that homes or entire communities can be protected against an EMP event. A shed, home or a larger building can be EMP-protected, along with protected solar power.

Don White is CEO of EMP Solutions and past president of the IEEE Electromagnetic Compatibility Society. He can be reached by email at donwhite@emp-safeguard.com.

Jerry Emanuelson is co-author of the book EMP Protect Family, Homes and Community. He can be reached by email at emp@futurescience.com.

– By Don White and Jerry Emanuelson